How to Remove Dust From Sintered Metal Filter Materials (Part 2)

1. The initial stage of filtration. The dust is deposited on the surface of the medium with the smoke flow passing through the sintered metal medium. At this time, it mainly depends on the interception and diffusion mechanisms. The distribution of dust particles on the surface of the sintered metal is uneven, and the velocity distribution of the airflow on the surface of the medium is also uneven. The dust is continuously deposited, but no continuous dust layer is formed, and the pressure drop increases very little. At this time, the pressure drop loss is very small.

Second, the intermediate stage of filtration. The dust piles on the surface of the sintered metal are continuously connected to form a continuous filter layer, that is, filter cake. This stage is the period of large-scale filter cake formation. At this time, the filter pore size is reduced, the dust interception and deposition effect is greatly improved, the filtration efficiency is sharply increased, and the pressure difference is rapidly increased. Due to the uneven airflow distribution, the formation of the dust layer starts locally, and the airflow has a tendency to find large pores when passing through the pleated sintered mesh filter. As the area of the dust layer increases, more airflow flows The area where the filter cake is not formed makes the area of the filter cake expand rapidly, so the filtration efficiency increases quickly and the pressure difference rises rapidly. 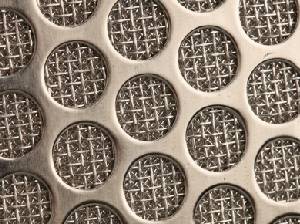 3. Stable stage of filtration. This stage mainly relies on the filtering and sieving function of the filter cake. The sintered metal medium plays the role of forming the filter cake and supporting reinforcement. At this time, the filtering mechanism is mainly sieving, and the channel through which the airflow passes is the micropores between the dust particles. At this time, the pressure difference changes slowly and is approximately unchanged relative to the intermediate stage of filtration.

Fourth, filter the backflushing stage. With the continuous thickening of the filter cake, online cleaning is required to obtain the recycling of the filter. It is generally implemented with a pulse backflush system. At this time, the dust removal efficiency slightly decreases. This completes a filtering cycle.

Although perforated metal sintered wire mesh requires a certain thickness to ensure its sufficient mechanical strength, it does not make much sense for the dust removal of particles. Studies have found that the filtration and separation of dust-containing gas mainly occur in the filter media. surface layer. Compared with the traditional uniform sintered metal media, the non-uniformly treated sintered metal layer has a significant effect on filtration, and it is less prone to clogging during long-term use, extending the life of the filter.

The flow velocity has an important influence on the pressure drop of the filter media, which largely determines the pressure drop of the entire filter. The flow in the filter body is generally regarded as a one-dimensional flow, ignoring the uneven distribution of pressure and velocity in the axis direction. Although the calculation is simplified, it is difficult to design and further optimize the filter body. The pleated filter metal layer structure is widely used in various industrial filtration equipment. Because the sintered metal has good mechanical processing performance, it is easy to process and manufacture, and the structure is compact, it has a larger filtration area than the ordinary plate filter layer, so the filter layer is pleated The design can reduce the surface velocity of the filtered gas, improve the collection efficiency of dust particles, and reduce the pressure drop. Pleated sintered mesh filter uses this principle.